Happy Memorial Day!  Hope you are getting to relax!  Our BBTB2 challenge theme this week is to use a cricut car on a project.  I have a had some pictures waiting for a car layout!  When we went to Universal Studios earlier this year, we had lunch at the Hard Rock Cafe.  It had a pink cadillac hanging from the ceiling over the bar (along with plenty of rock and roll themed decorations, of course).  The kids were mesmerized by the car hanging from the ceiling by our table and it's in all the pictures I took!  I used the Nifty Fifties cartridge to cut this awesome pink vintage car, juke box, and hamburger for my layout.  The font is also from Nifty Fifties.  (If you ever get a chance to eat there, the burgers were amazing!) 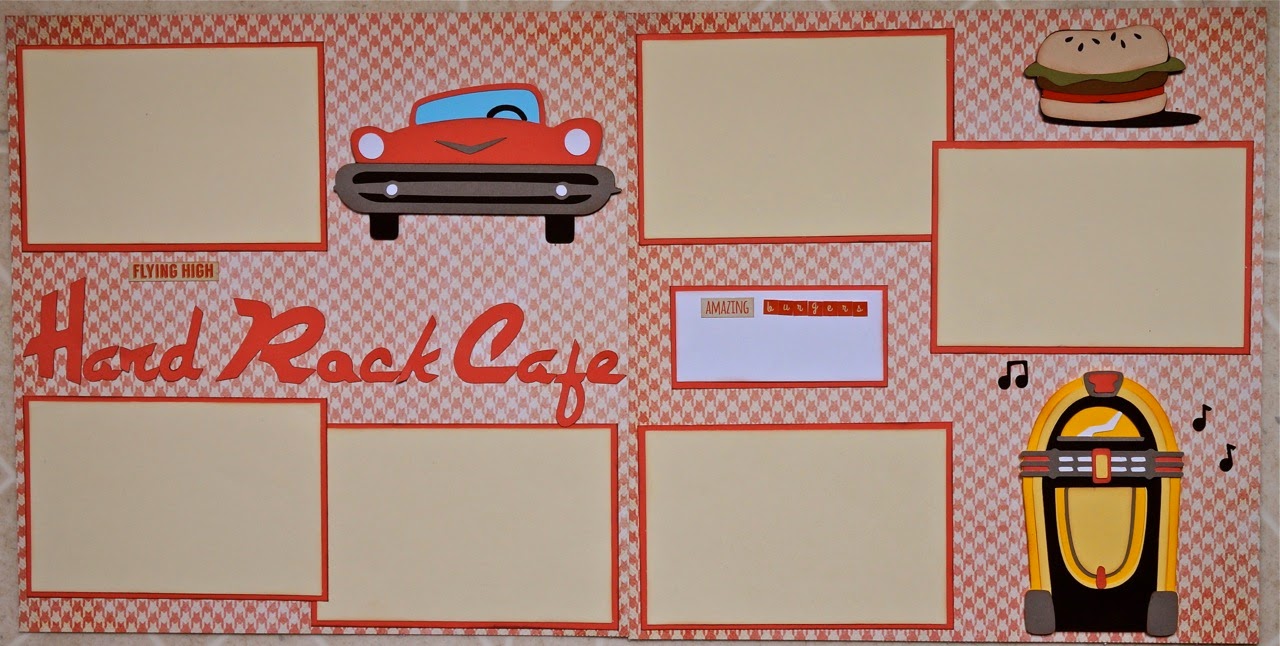 not sure if this is a Cadillac or not, but it looks cool! 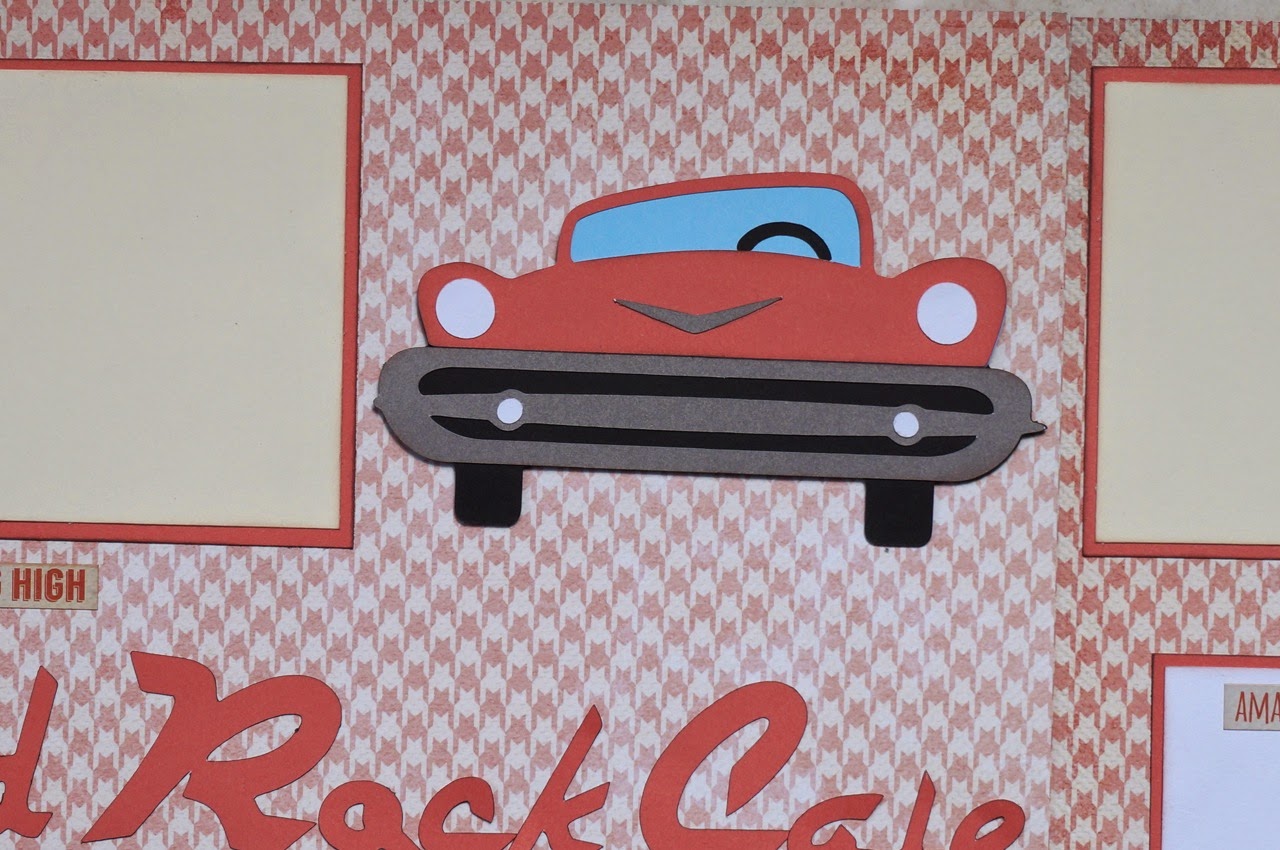 had to make a little spot to write... 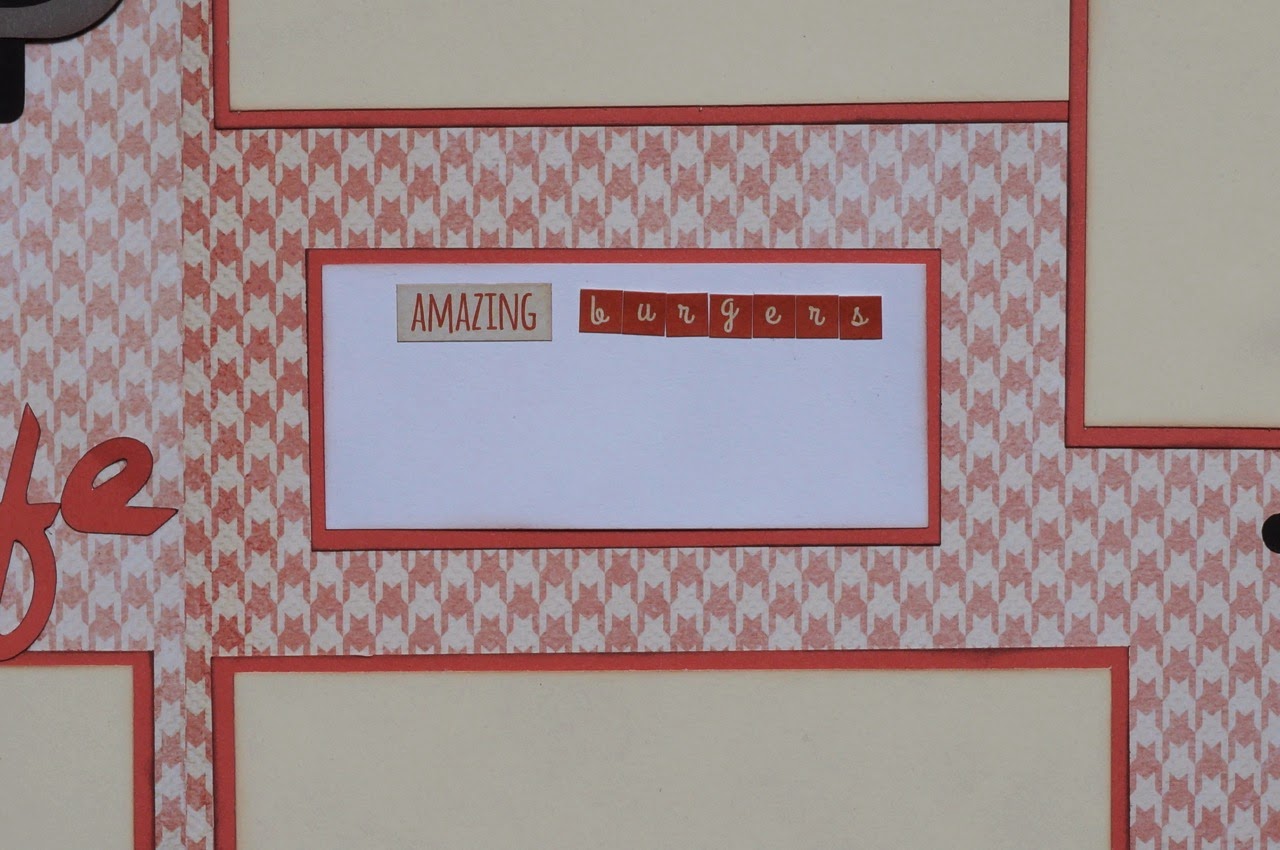 of course lots of rock and roll played while we ate! 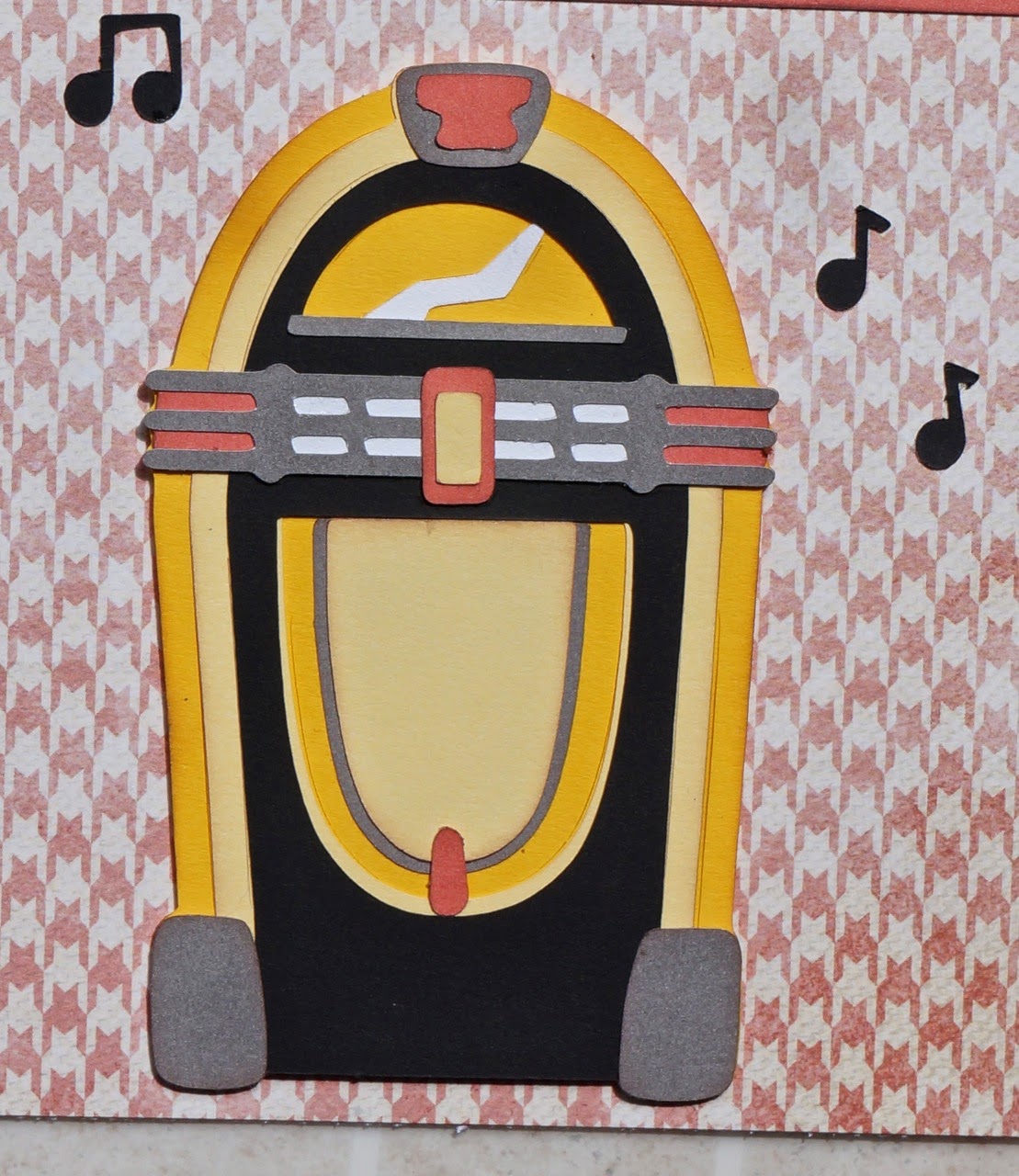 In fact, it seemed like they were having an 80s flashback moment with the music so while my husband and I were rocking out and singing along, the kids puzzled over the old MTV music clips that were being shown on the TV over the bar!  "Why didn't they just put their videos on YouTube?" asked one of my kids.  Facepalm moment!!!!

There are cool cars to be seen over at BBTB2 from the design team, so have a look and link up a new project!

It's my day for the daily project at Exploring Cricut!  I have a school themed layout for you today, using the Varsity Letters and Recess Lite cartridges, as we count down to the last days of school this year.  My high schooler is taking a final this morning, in fact!  On the last day of school, I always take pictures of the kids celebrating the end of the year, kind of a fun tradition.   So for my layout, the stack of books and backpack are cut with Recess Lite.  The font is the narrow font on Varsity Letters.  I used the Simple Stories Smarty Pants collection for the print papers. 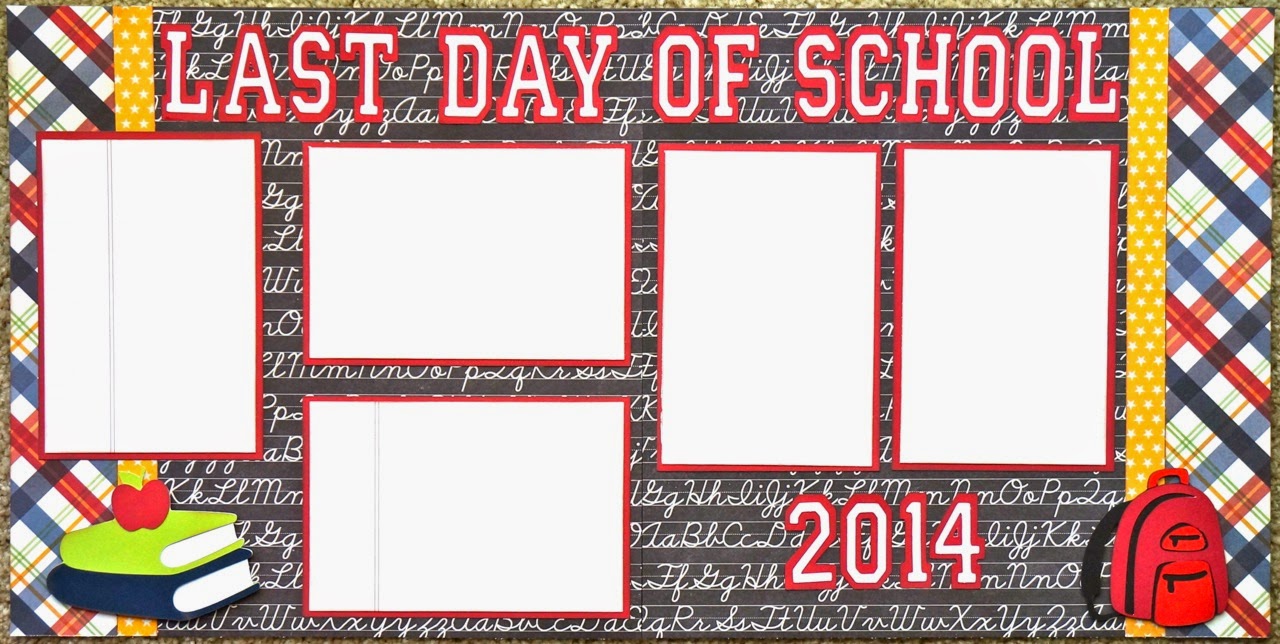 There is a fresh daily project for inspiration every single day at Exploring Cricut, so keep checking back and see what's up!  Have a great Memorial Day weekend!

I have two posts today:

Happy Monday!  Everyone in my house was laid low by a virus last week, so I'm relieved to be done with fever and coughs.  I even had to call in sick to work, since it's not cool if the feverish nurse is coughing all over the patients!  So I'm ready for a sunny new week full of good health for all, LOL!  So for crafty pursuits, I have two posts today.  Just below is my On Vacation layout for the Exploring Cricut summer fun challenge, using the Pack Your Bags cartridge.  Scroll down one post for my cute little stack of presents for the BBTB2 gift packaging challenge.  Have a great week!

Posted by Scrapping Girl at 12:30 AM No comments:

On Vacation layout (for Exploring Cricut)

The Exploring Cricut challenge theme this week is summer fun, including the colors red and blue.  Are you going anywhere fun for vacation this summer?  My layout for today using the Pack Your Bags cartridge is for a beach trip.  All the cuts are from Pack Your Bags.  The print papers are from the Echo Park Paradise Beach collection from last year.  I can almost smell the sunscreen when I look at this! 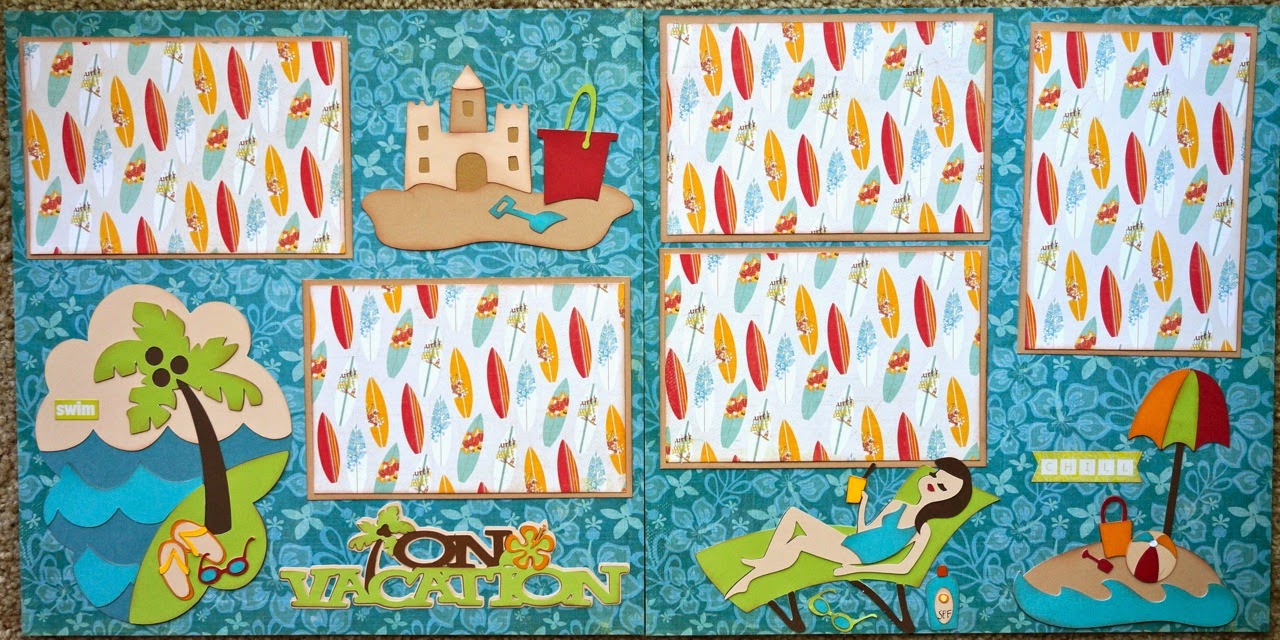 Doesn't this just make you want to kick back with a nice frosty lemonade and lay in the sun?  My pasty winter white self needs a little tan!  I guess I'll just have to remember how it felt when I look at the pictures….  Hope you join us for our summer fun challenge this week!  You can use your cricut or SVGs, so lots of options to play along.
Posted by Scrapping Girl at 12:30 AM 8 comments:

Email ThisBlogThis!Share to TwitterShare to FacebookShare to Pinterest
Labels: Pack Your Bags, summer

Stack of Presents tag (for BBTB2)

The challenge this week at BBTB2 is gift packaging:  bag, tag, box, etc.  I found some cute tags from the Birthday Bash cartridge that look like a stack of presents for my project.  They are cut at 4 inches.  I made a couple to match some of my gift wrap colors and I plan to tie these tags onto the package.  Super fast and simple! 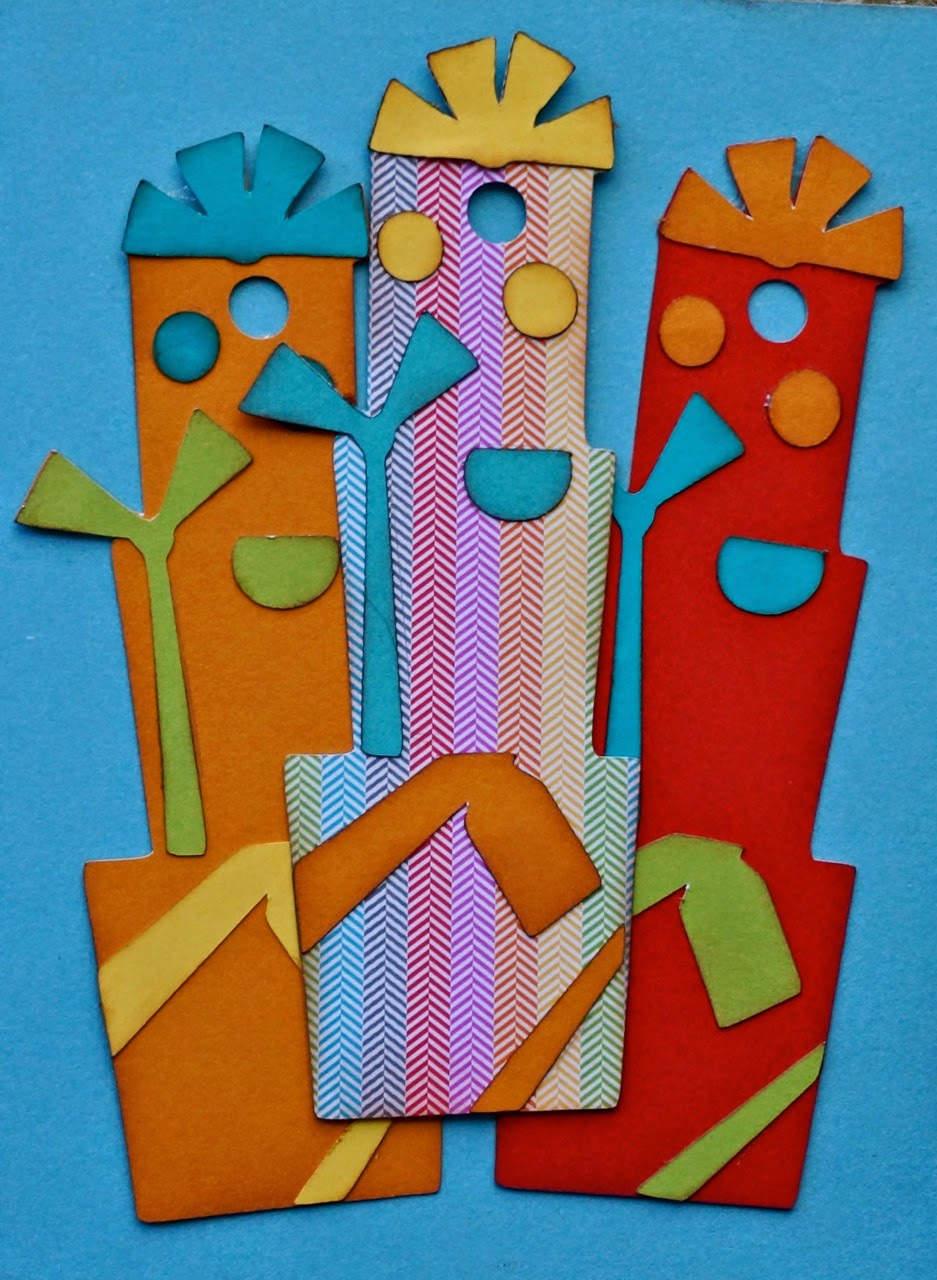 The DT members have a variety of gift packaging ideas to share-check them out and get inspired to make something and link it up to share with us at BBTB2!
Posted by Scrapping Girl at 12:30 AM 10 comments:

Happy Monday!  I hope all the moms out there had a wonderful day yesterday!  I got to spend my day with most of my extended family, including my amazing mom!  And my kids made me breakfast served on a silver tray!  But on to crafting….it's a school themed challenge at BBTB2 this week-great for those end of year school events coming up here in May.  I can personally attest to the fact that if you have school age kids, between all the end of year concerts, award banquets, parties, and graduation it gets kind of crazy!!!

For my project, I made a layout for pictures from some of the end of year events we will be attending this month.  Since it will include pictures of all three kids, I went with a general title of Star Student.  The Star Student font is the sugar script font from the Type Candy cartridge.  The stack of books and the layered stars are from the CM This and That cartridge.  I went with bright primary colors to match the cute print papers are from the Echo Park Paper and Glue collection.  Gotta love that book print paper!  I'm going to print my pics 3x5 instead of 4x6 so it will show too. 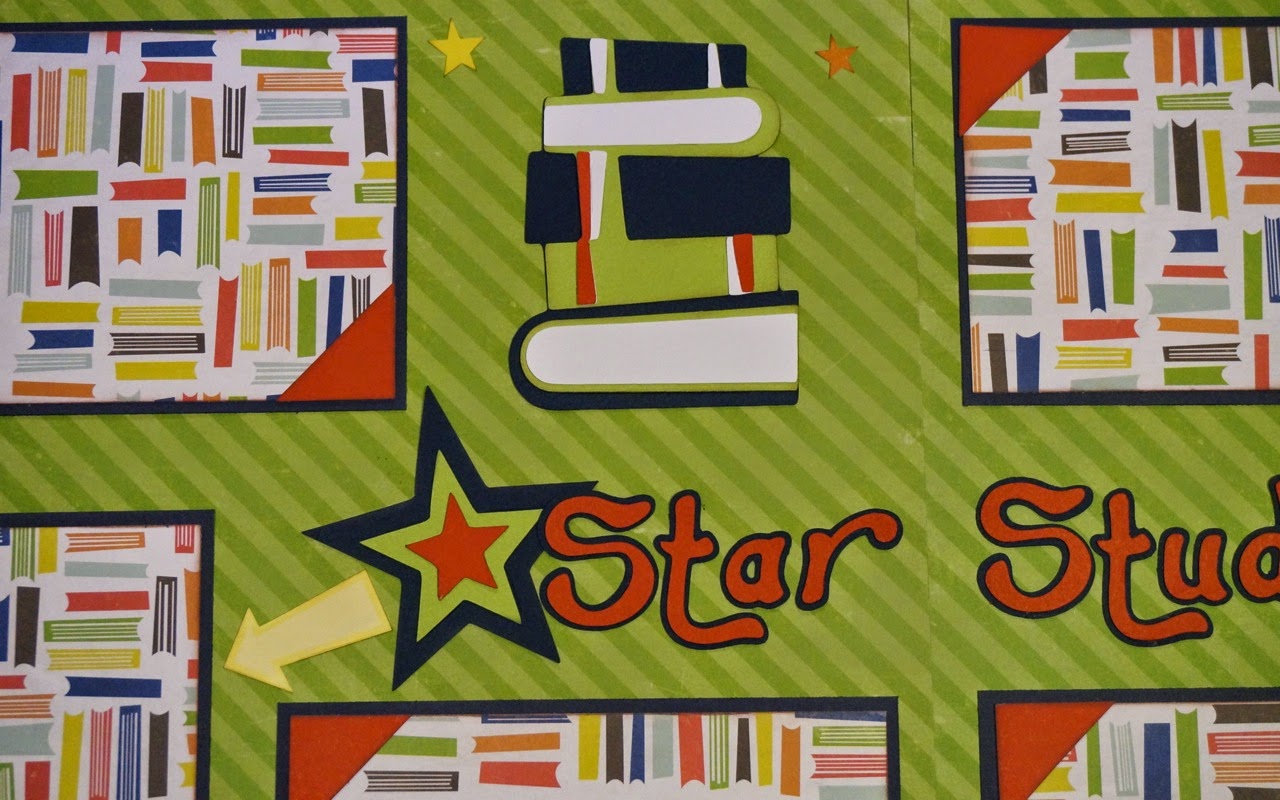 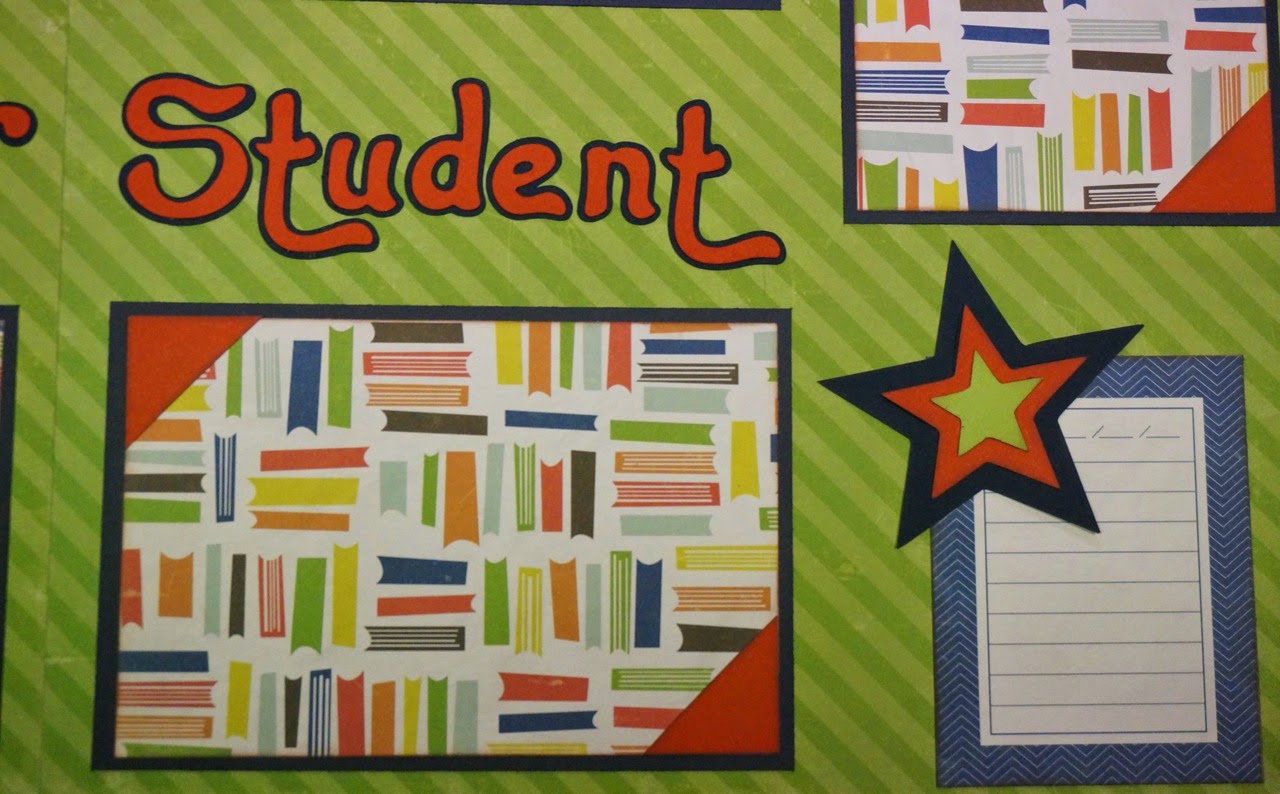 Can't wait to see what you'll come up with for the school themed challenge-I'm looking forward to seeing projects!  Check out the cool design team projects over at BBTB2 for some inspiration!
Posted by Scrapping Girl at 12:30 AM 7 comments:

Email ThisBlogThis!Share to TwitterShare to FacebookShare to Pinterest
Labels: Camping Critters, CM This and That, school, Type Candy

It's my day for the daily project at Exploring Cricut today and I have a bee-u-tiful layout for you for any   fun spring/summer occasion!  I used the Create A Critter cartridge for all the cuts.   The sun is cut at 2 inches, the bee at 1 1/2 inches, and the word smile at 2 1/2 inches. . The Create A Critter cartridge is so versatile that it's my go-to cartridge when I'm coming up with something on the fly, so when I was looking at the sunshine yellow background print paper, the sun and clouds and saw the pieces of cloud paper I had leftover from another project, it all came together in a happy flash of inspiration!  I used my layout for fun summer pictures from last year at Navy Pier in Chicago, but I think it would work for pics from almost any occasion.  Hope you enjoy! 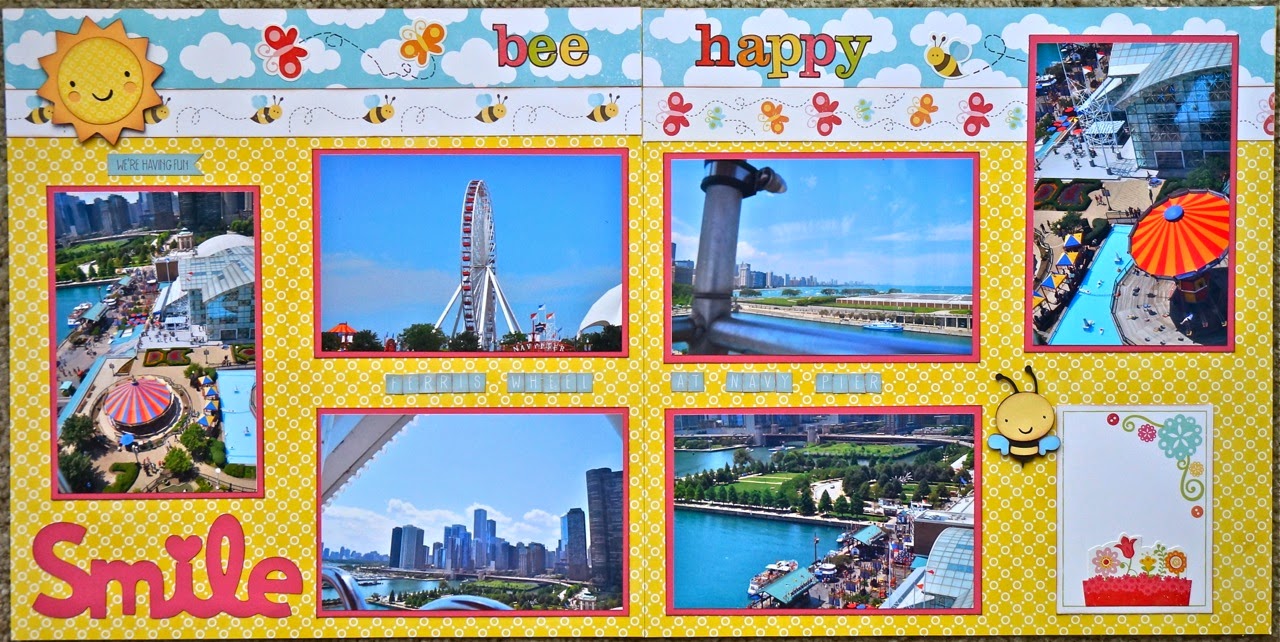 Remember to check out the daily project each day at Exploring Cricut!  And there are a few more ays left to enter our Mother's Day challenge!

I'm also going to link this up with the patterned paper challenge going on at Fantabulous Cricut this week.

Posted by Scrapping Girl at 7:51 AM 7 comments:

I have a Mother's Day card for you today!  Both the Exploring Cricut and BBTB2 challenges this week were to make a Mother's Day project, so my card for my mom works for both.  I am really lucky to have the greatest mom ever, so I wanted her card to be beautiful, just like she is.  I used the Phrases cartridge for the Happy Mother's Day sentiment on the front and the beautiful print paper is from the Echo Park Everyday Eclectic collection. 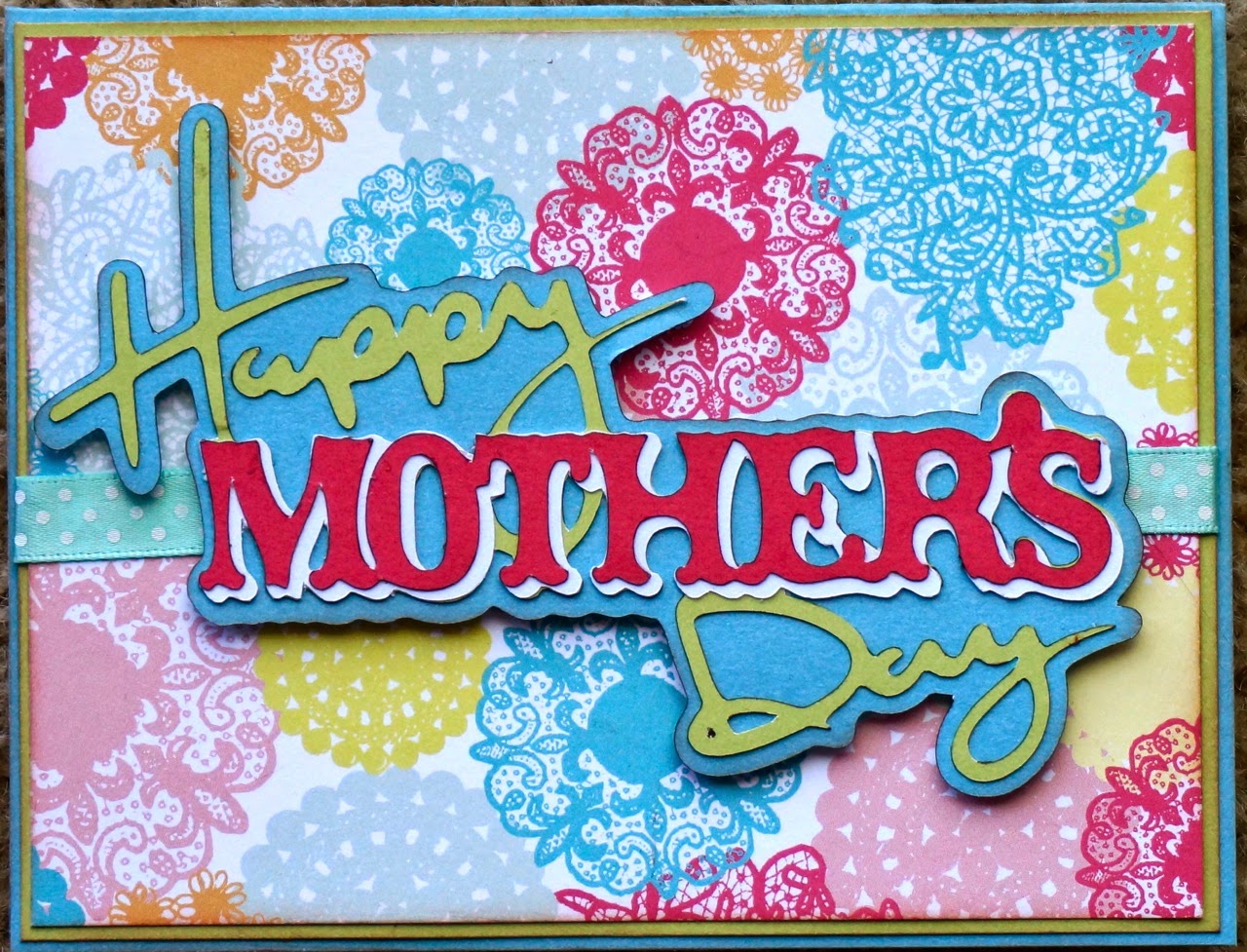 So check out the design team blogs at both BBTB2 and Exploring Cricut to see some fabulous Mother's Day projects and link up a project!  You know you want to make that special card for your Mom!!!